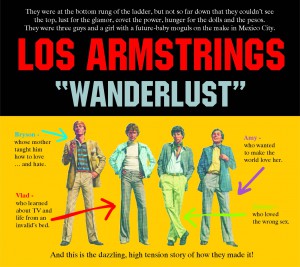 Los Armstrings were a punk rock band active in and around Mexico City during 1998/2000.
None of the members, however, were Mexican. They came from the USA (Bryson Brooks, bass
& vocals, Amy Brown, drums), Great Britain (Jonathan Farr, guitar) and Serbia (Vladimir
Arsenijevic, guitar). Brooks and Farr are both visual artists/illustrators while Arsenijevic is a
writer/novelist. They formed in a hotel in Centro Historico and, over a three years time span,
played in bathrooms, galleries, abandoned nunneries, clubs… really anywhere they could fit
the band. They recorded and issued only one album (Wanderlust, production: UrbaNS 2000)
and split when virtually all members left Mexico city in late 2000.

Mehmed Begic (1977) was born in Capljina, Bosnia and Herzegovina. He studied South Slavic languages and literature at Pedagogical Institute of Mostar, Pedagogy, as well as comparative literature at the Faculty of Philosophy in Sarajevo. He has completed none of the above. Lives in Managua, Nicaragua.
View all posts by Mehmed Begić →
This entry was posted in Muzika and tagged Punk Rock. Bookmark the permalink.